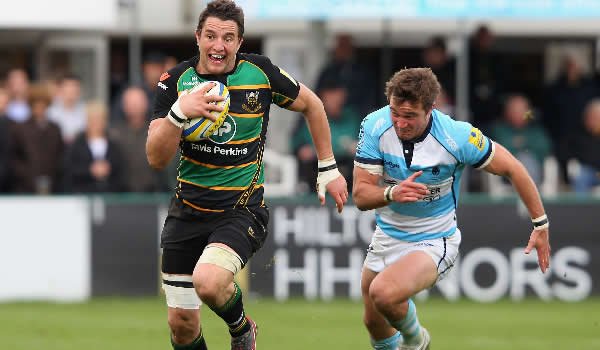 The Northampton Saints would be facing Castres which is a French team and it would be a challenge that the team would be up against. That is also because the previous four games proved to be challenging for the team. They were able to win only in one of the four games. END_OF_DOCUMENT_TOKEN_TO_BE_REPLACED

IT’S A MUST WIN GAME FOR US – MICHAEL PATERSON

Posted on December 15, 2016 in Northampton Rugby

The game between Northampton and Leicester Tigers which will see Northampton as visitors, will be the first East Midlands derby for Michael Paterson.

The flanker, ahead of the derby, has said that the game is a must win game for them. He was part of the Northampton Saints team that went on to concede a late score last Friday in their game against Newcastle Falcons.

With five minutes into the game, Saints had battle valiantly, and thus secured a 16-15 lead with no more than 5 minutes left on the clock. This was despite the absence of prop, Kieran Brookes who had been sent off just two minutes before half time.

They could not keep the lead for so long or even go on to extend it as NikiGoneva crossed before the extras were kicked in by Joel Hodgson.

Paterson and his fellow squad mates will on Saturday, visit Welford Road in the game against Leicester Tigers and for the flanker, he believes it would be a lively game for them and a vital one at that especially since it was between a close rival of theirs. END_OF_DOCUMENT_TOKEN_TO_BE_REPLACED You thought only his music taste pointed at the children’s movies? You are wrong. When asked about his favorite film, he picked ‘The Jungle Book. And he was unabashed about his love of Disney films in general. He said he has always been a fan of Disney films and music. Those movies teach you a lot of valuable life lessons, he said. He added that those movies provide a lot of moral guidance and knowledge. May be, Disney films can offer a lot of insight to adults as well! END_OF_DOCUMENT_TOKEN_TO_BE_REPLACED

Posted on September 17, 2016 in Northampton Rugby

Northampton Saints have their last victory against Bristol to inspire them as they gear up to face Castres this weekend in France. Many players had helped to make a difference when the team played against Bristol. For instance, Louis Picamoles was one of the star players in that game. It was an Aviva Premiership game where Louis was able to perform well along with other tries put in by players like Myler, Hanrahan, Wood and Haywood. Mallinder was able to make a successful goal in this game. There were other tries such as by Woodward and Fenton-Wells. END_OF_DOCUMENT_TOKEN_TO_BE_REPLACED